This month, digital payments service ViettelPay is the brand that has achieved the highest uplift in its Ad Awareness over the past month.

The rise coincides with their latest Tết (Lunar New Year) campaign with singer JustaTee, actress Hoàng Thùy Linh and rapper Đen, to promote their services. The ad has over seven million views on YouTube alone.

Launched a month ago, the advertisement features three main scenarios, depicted in a music video. The first is a young man (played by JustaTee) who is dreaming of a banquet dinner for his family for the upcoming Tết celebrations. The second is a villager (Hoàng Thùy Linh) who arrives in the city and goes on a big shopping spree, but attempts to pay with bales of corn and even a baby piglet. The third is a struggling rapper (Đen) whose musical instruments are being repossessed. A God of Wealth, who send them money via ViettelPay, solves all their problems and they are able to have joyous Tết celebrations. 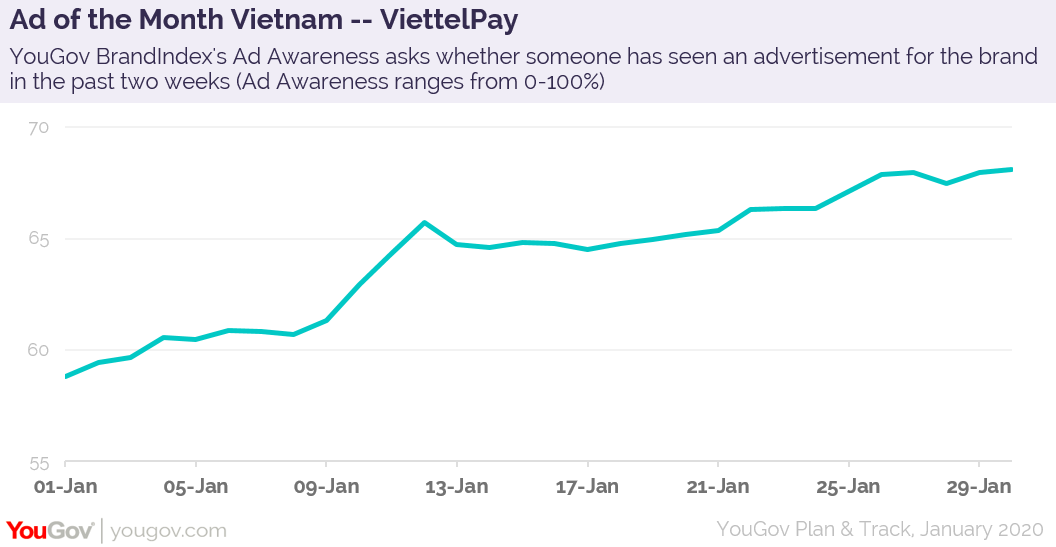 YouGov BrandIndex data shows that ViettelPay’s ads have captured Vietnamese attention. ViettelPay’s Ad Awareness score score (whether someone has seen an advert for the brand in the past two weeks) has risen from 58.8 to 68.1, jumping +9.3 points.

Vietnamese are not only noticing ViettelPay’s ads, more people are not using their services, with an increase of Current Customer score of 34.2 to 37.8, up +3.6 points.