Welcome to the 2016 mid-year Rankings.

Google and YouTube are once again atop the international rankings. While Google made the Top Ten list in 15 markets down from 16 in the 2015 annual, YouTube is now in 15 lists up from 14 in January. Google made number one position in Australia and Canada.

Facebook maintains its position at number four and is now on twelve market lists up from eleven. WhatsApp moves up from seventh to fifth place.
Some of the biggest movement on the international list is from Apple which has slipped from fifth on the international list to eighth, and now appears on only five Top Ten lists down from ten in January for the 2015 Annual Rankings. iPhone was on eight market lists in January and only three for this mid-year ranking and has tumbled out of the Top Ten. Samsung by contrast maintains third position on the all market list and has improved from 12 to 14 Top ten lists and takes number one spot in Germany.

Lidl has shown considerable improvement moving from tenth position to sixth and now listed by six markets up from four. Toyota and Uniglo have moved into the top international listings for the first time.

Amazon continues to dominate the US rankings but has slipped on the international lists. In January it appeared in four market lists; mid-2016 it appears in the Top Ten only in the US.

This year we introduce two new markets, Russia and Hong Kong and continue to expand our global reach. We hope you enjoy browsing this mid-year ranking and will be bringing you even more brand stories throughout the year. 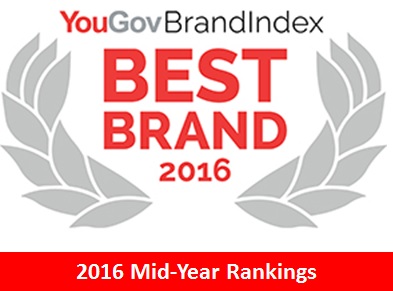